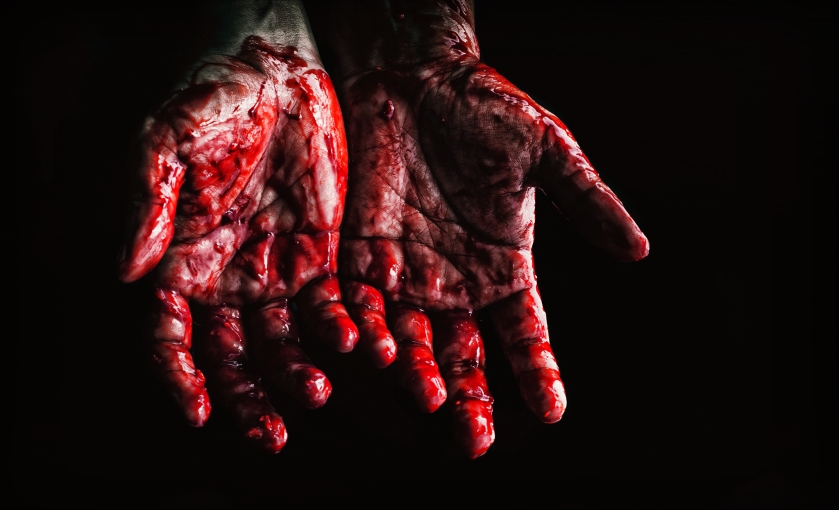 The dry rasp of his eyes opening dispelled the dust that had accumulated in the grooves of his skin.  His sudden indrawn breath created motes in the dim light of the early dawn.

His body jerked violently upward and a wretched cry burst from his lips as gravity pulled him to the dry, rotted floorboards.  Thin slivers of wood punctured his skin while he lay there panting.

It was a matter of moments before he pieced together that the slick wetness his hands and head lay in glittered with a crimson sheen.  The surface of the pool was broken as he struggled to push himself away from it.

Wildness radiated from his large eyes as his hands searched his body for the source of the blood.  Streaks of it ran up the walls and glistened against the filthy popcorn ceiling.  Horror ruled the curves of his face as he spied the body draped unceremoniously over the small chest in the corner.

Tears cut runnels through the scarlet splashed across his face as his body shook, “How long have I been here?  How many days?  How many months?  Each morning it’s the same.  More blood on my hands and a new body somewhere in here.”

His eyes lit upon the long piece of cool metal that rested forlornly under the saggy and broken bed frame.  Greedily, his fingers reached for it.  It was cold to the touch, much colder than the room would allow.

“Why is this happening?” he cursed against the four walls of his prison.  “How many times have I tried to leave and yet I always find myself here,” his eyes lit upon the form on the chest, “with only the company of a corpse.”

The slide of the M1911 pulled back to frame an empty chamber before it slipped back with a violent click.  The magazine clattered against the floor, but he could tell from the sound that it was empty.

The pistol fell loosely from his grip before he looked skyward, “Why is it always a different body?  Where do they come from?  Where do they go?”  His bloodied hands clutched at the skin stretched over his skull, “Am I going mad?”

A woman watched as he pulled himself under the bed from the tiny monitor bolted to the desk.  Her lips curled of their own accord as she grabbed the handset of the old rotary phone and her long, painted nail dialed 0, 1, and 0.

The buzz and click sounded loud in the confines of the security station, but she remained languid until the voice came through.  “Yes sir, I believe this one is almost ready.  Only another day or two.  Thank you, sir.”

The phone clacked against the ancient plastic of its body.  Her fingers steepled as she continued to watch him through the monitor, “Only another day or two…”