Whew!  This one is a bit long.

The last rewrite on Book Two is moving along quite well.  Only a few more chapters to go and it’s ready for another beta read-thru.  In fact, I already have a beta reader going through what I ‘fixed’ to catch those random errors that can crop up.  So far, I am much happier with it and look forward to knocking those remaining chapters out.

But a trip that had been in the works for over a year cut the rewrite a bit short.  Where did we go?  Well, I guess I could talk about the trip a little bit.  Only if you want to, though I suppose you could stop reading here and I would never know.  Hmm… okay!

My grandparents traveled a lot (something I am trying to emulate).  They had seen the Pyramids of Egypt; been all over Europe, throughout the Mediterranean and other places that were only mentioned in passing.  But the one place they had journeyed to that always stuck out in my memories was Macchu Picchu.

Now, this could be because of Indiana Jones (maybe even the Temple of Doom). Might even be because of Allan Quatermain and the Lost City of Gold, The Golden Child, et al.  In any case, the imagination was alive with the ideas of wandering through the jungle and coming upon an ancient city of stone hidden away.

Lucky for me, my wife wanted to go to Macchu Picchu too!  The movie that got her interested in it was Vibes (starring Cyndi Lauper and Jeff Goldblum. Odd little movie).

Interesting how movies can get a person excited to see another place in the world, even another time.  I have many thoughts on the power of movies and TV.  Maybe, I’ll write about that some other time.

What was I talking about?  Oh yeah.

The Inca Trail.  We did it!  Over five days of hiking and camping ranging from 7,972 to 13,975 feet above sea level.  And God knows how many stone steps there are to traverse.  We added a hillock at the highest point to hit 14,025 feet because we were that close.  It was an amazing experience. 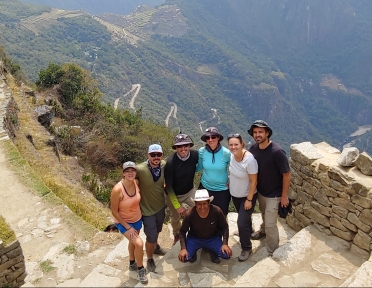 Besides us, our group consisted of some very cool people we didn’t know.  Mercedes and Kyle, Olivia and Matt, thanks for being the awesome people you are. Our guide was Wally and he was great.  Our porters and chef were amazing.  I might go on and on about the chef.  That man has serious skills.

Before we even jumped on the trail, Wally took us to a couple of ruins close to Cusco, Pisac, and Ollantaytambo.  While both sites have terraces, the two sites served different purposes.  Pisac has mummies of royalty in the hills set toward the rising sun and Ollantaytambo has a giant face carved in a mountain crowned with buildings (actually there are two faces).

Just two years ago, we had driven all over the Southwest of the United States to visit many of the Ancestral Puebloan (aka Anasazi) sites that dot the landscape (Mesa Verde, Chaco Canyon, Canyon de Chelly, Bandelier, Hovenweep, et al).  These Incan sites are larger, except for maybe Chaco Canyon.  If you are into the building techniques of ancient civilizations, it is neat to see the differences based on building materials and technology.

The Inca trail consists of hikes ranging from 6 miles to somewhere over 9 miles a day.  If you ever decide to do it, Marianne Jennings gives a great breakdown.

The best part of the trail (for me) is that you get to go through a bunch of ruins that you can’t access any other way.  When there are only seven people wandering around these immense ruins, it’s easy to lose sight of the others and feel like you are there by yourself.  I relished these moments because this is the experience I really wanted.  Was it worth it? Hell to the yes.

Each day was fantastic in different ways.

The first day was spent walking past these tiny villages of a couple structures or so.  You could buy water, fruit or other snacks… even ice cream.  But what I liked most about these tiny villages is they reminded me of the little teahouses you might see in old martial arts movies.

The second day was set to be the hardest.  The highest point on the entire trail is on this day through Dead Woman’s Pass and it wasn’t easy.  It’s basically a traverse on stone steps up the side of a mountain (known as the Gringo Buster) followed by a traipse down the backside on more stone steps.  Did I mention steps?  If not, be prepared as there are more stone steps.  The Incans loved stone steps.  I thought I liked stone steps, but this was too many, haha.  Oh!  We also saw skulls of long-buried Incans along the way.

Watching the fog/mist roll in on the third morning was a sight (or lack of sight) to behold.  I have never seen fog move that quickly.  You could see it circling in and blanket the whole valley in a matter of minutes.  It was truly a moment of walking amongst the clouds.

The last day was the hardest for me.  My knees had doubled in size. My calves were hard as rocks and I was beat.  Luckily, there were only more stone steps to go up and down on (wink).  We had already beaten the Gringo Buster and we had the Gringo Killer to go.  Comparatively, the Killer is more a spider walk staircase and not that hard while the Buster never seems to end.  We finished out the day with a tour of Macchu Picchu and a bus ride to Agua Caliente (neat town).

The ruins we got to pass through were a major highlight for me, the checkpoint for Llactapacta in the valley below, Runkaray disappearing and reappearing in the mist, the crazy staircase up to Sayaqmarca, Wally’s flute playing wafting into the valley at Winay Wayna, the crazy staircase down and through Phuyupatamarca, and finally making it up the Gringo Killer to Inku Punti, the Sun Gate.

Okay now, the food.  Oh My God!  The best corn pancakes I have ever had, the best Aji de Gallina we ate the entire time, this orange-colored marmalade that I can never have again and the soups!  Each day we had a different soup and each one was incredible.  I am not a big soup guy but I could be converted if I learned how to make these (or someone made them for me).  On top of that, our chef baked a cake on the trail.  No oven, on a single burner.  Beautiful piping and icing and it was delicious.  There were so many amazing meals that I can’t remember now because I cannot get over the fact he made a cake… at a campsite… on a single burner.

We went back to Macchu Picchu in the morning and climbed Wayna Picchu to go to the Temple of the Moon.  You know how I said there were stairs on the trail?  This mountain is only made of stairs.  Up and down, up and down.  And the fog came in that day.  You could look off the side of the mountain and it was only whiteness.  I felt like I was visiting a Buddhist monastery above the clouds (the kind you see in wuxia films).

We went down the backside and visited the Gran Caverna.  It was so quiet on this side of the mountain.  We passed 4 people in total.  Gran Caverna was the spot I really wanted to go to on Wayna Picchu.  There are doorways built into the side of the mountain that some believe to be portals to the underworld or even other worlds.  It was strangely still there.  I could almost believe the doors went elsewhere.

I had read some reviews that spoke about Macchu Picchu being a disappointment after the other sites on the trail.  I don’t know what they’re talking about.  The place is immense.  Some think it is a winter palace, others a temple to the sun and also a university of learning with experimental agriculture on the terraces.  It could be all three as far as I’m concerned.

Our last two days were spent back in Cusco.  I like Cusco.  There are dogs everywhere and they all look so relaxed and happy.  We visited a few of the other sights that were within taxi/bus range (Susqayhuaman, Pikillacta, and Tipon) and enjoyed the food and the people.  Pikillacta is huge.  It’s believed to have housed over 20,000 workers to build all the roads, cities, villages and temples for the empire in the Cusco region.

Oh!  I am still saddened I can never have another Supay Quinoa Pale Ale.  It was better than I expected and I will miss it dearly.

After a delayed flight and no flights to get us back, the airline got us a hotel with dinner and breakfast.  On the downside, it was already past 11:00PM so dinner wasn’t happening and we had to be up and out of the hotel before breakfast time.  After a cold shower with no water pressure, we got to the airport and flew out of Lima, Peru. We made it home at around 2:00AM.  My workday starts at 5:50AM so I didn’t get around to much of anything.

Exhausted as I am, I can’t wait to get cracking on those last few chapters.  But it’s a new day and I have to prep for a concert tonight, Babymetal and Avatar.

Living the life or at least as close to it as I can get!

Almost a Decade! 37 races with my companion in that time. So many medals!
Chinese Theatre
Head Towards the Light
Piers Need Support, Too
Aziz! Light!
Another 13.5 down for 2021/2022!
Loading Comments...
%d bloggers like this: