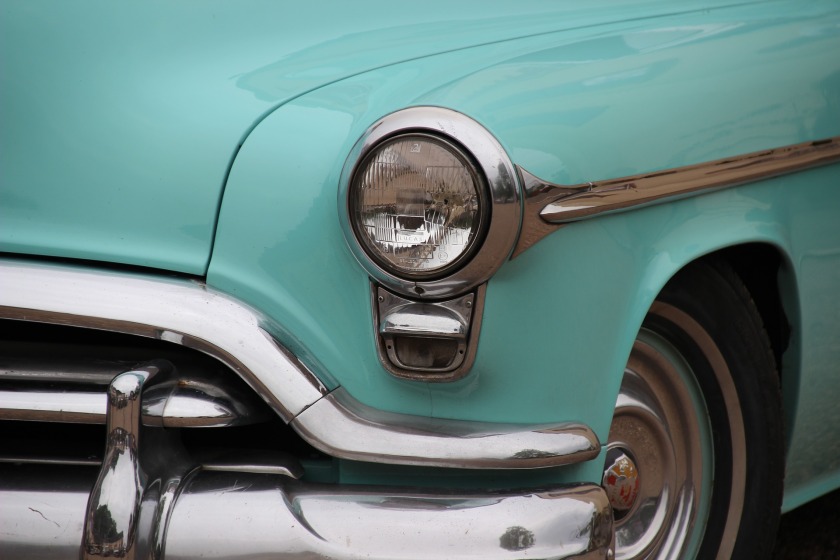 The whole of my vision went hazy before it all pixelated into a monochromatic gloom.  At the same time, the surprised intake of breath from the inventor filled my ears as he grabbed for my shoulder.   My systems struggled to make sense of what had just happened, but just as suddenly, the colors of the world rushed back into focus.

The grip on my shoulder lessened once my creator realized where we were.   Across a neighborhood street laid the place of my creation.   A vintage Oldsmobile with rocket fins drove past us as the inventor tried to see through his own window.  Abruptly, he stood up and ran to the sidewalk.  He stood there and scratched at his head before he made his way back to me.

With my limited vocabulary, I tried to explain what I had seen and done, “I… I plucked the time string that ran behind me…”

“Hmm, the time string?”  He rubbed at his forehead as he pondered at my meaning before he asked, “Explain to me what you saw before you plucked it.”

“Before my eyes lay a single string that stretched into the far distance while what lay in front of me were many that branched outward.  When I attempted to touch those that were in front of me, they moved away of their own accord.  But I could grasp the long one that stretched off behind me.”

“And you called them time strings?”

I nodded in the affirmative, but I couldn’t think of a way to articulate why I had said that.  He was quiet for a long period before he asked, “How far did we travel?”

I replied, “Four hundred and forty one feet.”

His eyes lit up as he wiggled in place, “By my calculations, we traveled one second backwards… in time!  Ha, ha!   How wondrous!”

Despite his age, he bounced and skipped around and each step seemed to buoy up the energy inside him.  A huge grin plastered itself across his face as he turned back to me, “We must hurry back and run another test!  Come along my friend!”

He hopped off in a hurry.  By the time he made it back to the sidewalk, he turned back to see me in the same spot.  He made his way back and looked down at where my torso ended and what existed of my unfinished legs jutted outward.

He smiled, “Looks like I’ll have to carry you back, Grigori.”