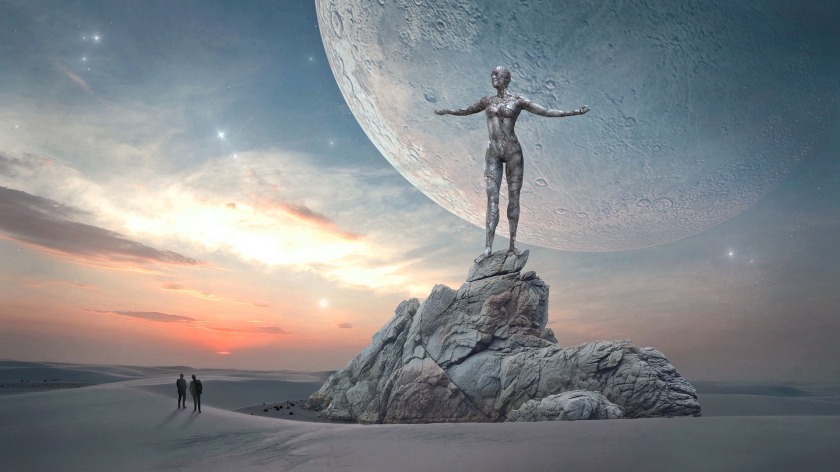 Once the vision dissipated, I leapt up and looked to my companion, but she only stared at the being with a sense of absolute disbelief.  My expression could only mirror hers as my hands clenched and unclenched while my mind went over the little that had been spoken.

But before I could summon a word to my lips, my companion shouted, “That’s preposterous!”

I nodded in agreement as she stumbled to her feet and continued, “How could your… your maker have received something from his past and have no memory of sending it!  That doesn’t make sense!”  As she continued on incredulously, her hands slid into fists.

In response, the being’s lips split into what could only be interpreted as a smile, but a smile from something that hadn’t used those muscles in years.   The entity waited until my traveling partner’s words dwindled down to a trickle before its voice boomed into the ether of this dead planet, “I have been present since before your forebears unearthed the spheres that laid waste to this world.  I have been alone for longer than you have lived and I have existed at times as more than a single entity…”

“That doesn’t belay the fact that what you say is impossible!” she shouted back.

“… and yet you trifle with me over a concept you cannot grasp.  Would you prefer me to continue my tale that you have traveled so far to hear or would you rather question me as to the reality of my existence?”

As she sucked in a breath to utter her response, I quickly interjected, “Susan, I for one, would like to hear the rest of the story.” At her angry look, I muttered abashedly, “I mean, we came all this way… and this individual must be the Watcher, right?”

The strange little monkey creature chittered loudly as my words faded into the deathly quiet, which only set me on edge.

Slightly mollified, Susan crossed her arms and dropped down to sit next to me.  I felt her body shift ever so slightly away before her toes began to tap against the pebbles that littered the ground around us.

The being’s empty eyes pulled at me.  I gazed into the twin voids and I sensed them tugging at my soul.  Strangely, I could feel Susan’s presence next to me grow closer until I felt entwined with her.  She must have felt it too, because her breathing escalated into short, rushed bursts.

Or maybe it was my own.  I could no longer tell us apart.